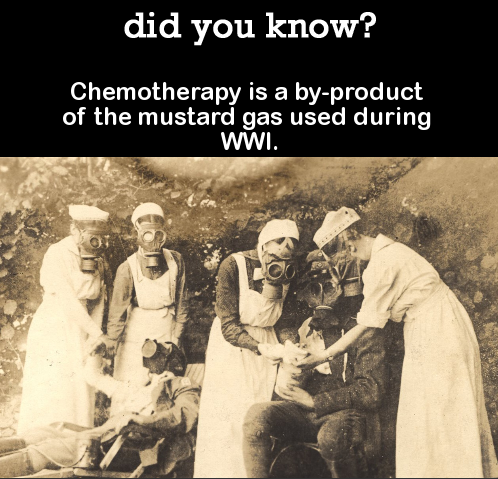 “Alexander’s “Final Report of the Bari Mustard Casualties” was immediately classified, but not before his startling discovery of the toxic effects on white blood cells caught the attention of his boss in the Chemical Warfare Service (CWS), Colonel Cornelius P. “Dusty” Rhoads. In civilian life, Rhoads served as head of New York’s Memorial Hospital for the Treatment of Cancer and Allied Diseases.”

“Of the more than 617 casualties who suffered from gas exposure at Bari, 83 died, all demonstrating mustard’s suppressive effect on cell division—suggesting it might be used to inhibit the fast-multiplying malignant white cells that can invade and destroy healthy tissue. Alexander had extracted invaluable data from the morgue full of case studies, pointing to a chemical that could possibly be used as weapon in the fight against certain types of cancer.”

“Based on Alexander’s landmark Bari report, and a top-secret Yale University clinical trial that demonstrated that nitrogen mustard (a more stable cousin of sulfur mustard) could shrink tumors, Rhoads was convinced the harmful substance—in tiny, carefully calibrated doses—could be used to heal. In 1945, he persuaded the General Motors tycoons Alfred P. Sloane and Charles F. Kettering to fund the Sloan Kettering Institute for Cancer Research (SKI), to create a state-of-the-art laboratory, staffed by wartime scientists, to synthesize new mustard derivatives and develop the first medicine for cancer—known today as chemotherapy.”

“In 1949, Mustargen (mechlorethamine) became the first experimental chemotherapeutic drug approved by the FDA and was used successfully to treat non-Hodgkin’s lymphoma. This triumph galvanized the search for other chemical agents that specifically targeted malignant cells but spared normal ones, leading the American Cancer Society to credit the Bari disaster with initiating “the age of cancer chemotherapy.””