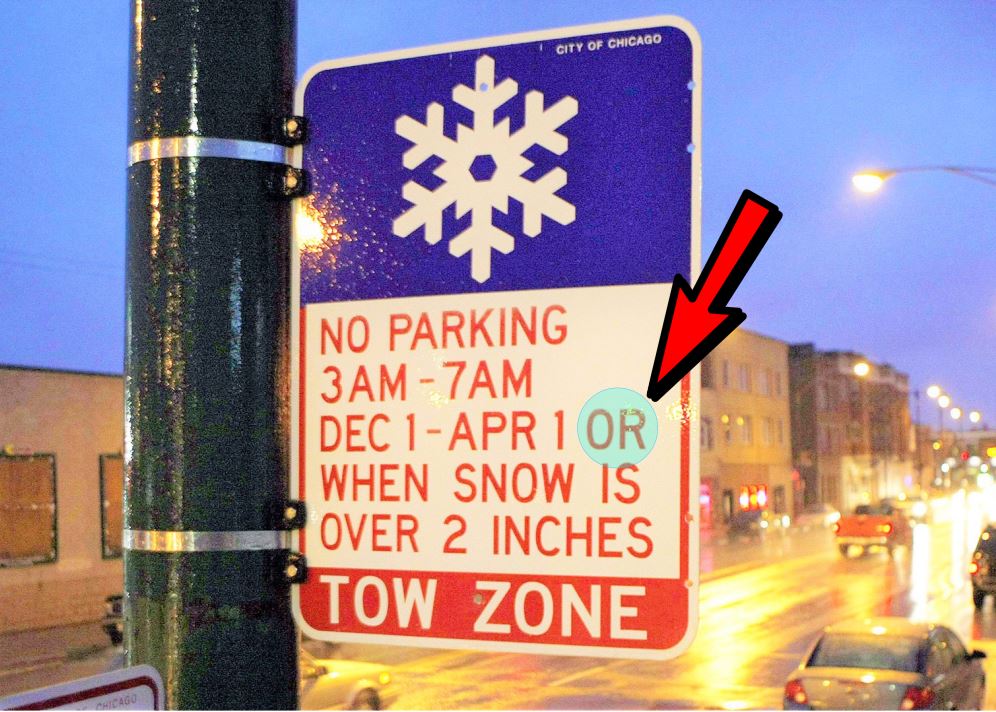 One of the City of Chicago’s favorite scams is the Winter Parking Ban which kicks off every year on December 1st at 3AM. The posted signs are deliberately misleading in order to trap people in this extortion racket that steals thousands of cars every year and puts countless people into debt.

The tricky part about the sign that people often don’t read correctly is the “OR” which is purposefully confusing. People tend to get the impression by reading a sign that says “WHEN SNOW IS OVER 2 INCHES” that if there is under 2 inches of snow, or no snow at all, then the city won’t tow your car. Seems logical, but unfortunately, to many people’s utter dismay, this is not the case.

See what the sign really means is that there is “NO PARKING 3AM-7AM DEC 1 – APR 1″…at all, period. See they left off the period and give drivers the impression that if there isn’t any snow it’s okay to park. Because, if there isn’t any snow…why would you tow the car? Well the reality is the snow is irrelevant to the city’s predatory extortion racket and they will tow your car even if it is 70 degrees outside each and every night from December 1st until April 1st.

Many people find out the hard way when they return to their parking spot to discover that their car has been stolen, towed off to the impound lot, where they are slapped with a $230 ticket, $35 per day lot charge, and have to pay off all their debt before they can get their car back. For people who are broke this is devastating because they might not be able to afford to get their car back for weeks or months and get charged TENS OF THOUSANDS of dollars in fees.

The worse part is that the winter parking ban is actually run by the City of Chicago at a loss and the city incurs a debt by enforcing the ban. To add further insult to injury these crooks make even more money by selling off the stolen vehicles at auction right out in the open. Theft has been officially legalized in Chicago. By the time some people can afford to buy back their car from these extortionists it’s already been sold off at auction and yet they still get stuck with thousands of dollars for tickets and impound fees.

~ On First Night Of Winter Overnight Parking Ban, 230 Chicagoans Did Not Get The Message – YouTube