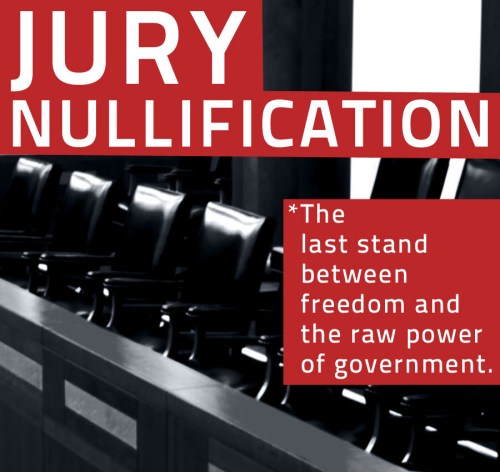 The jury is a centuries old tool that has been utilized by people since antiquity as the quintessential and number one most important means of preventing abuses of power by tyrannical governments and authorities who violate the common law. The whole purpose of having a jury is to put a check on the government from violating natural rights, liberties, and freedoms by giving the sole power of convicting any person for any criminal offense to an impartial group of at least 12 people living in the community who form a jury. In other words, the government does not have any power whatsoever to convict any person of a crime. The only power to convict a person of a crime exists within the jury and is exclusively beholden to the citizens. The government has absolutely no power to enforce any law or convict any person for any offense and all the power rests entirely in the hands of citizens who have the ultimate right and responsibility to render a verdict of whether the accused person truly is “guilty” or “not guilty” of the alleged crimes.

Now in order for a crime to have occurred two things need to happen. First, there must be a victim whose rights have been violated. And second, there must be a criminal intention to commit the act knowing it was going to cause harm. By law, both of these conditions have to be met in order for a crime to occur. So first, if there is no person that has been victimized or violated there is no crime. And second, if there was no criminal intention or knowledge that such an act might cause harm there is no crime. To convict any person of a crime the prosecution must prove beyond a doubt, to a jury of 12 citizens who MUST UNANIMOUSLY AGREE that (1) a victim’s rights were violated by the accused (2) who also acted upon criminal intent. This concept goes all the way back to ancient Rome where we get the Latin terms actus reus which means “guilty act” and mens rea which means “guilty mind” and is the very foundation for the “due process” of law.

Currently we live in a society where millions of innocent people are convicted, sentenced, and harshly punished for victimless offenses when in reality no crime has ever occurred. Think about all of the millions of people who have been incarcerated over the years and even got life sentences for possession of cannabis who languished in prison for decades losing their entire livelihood. Who did they hurt? Nobody. Who did they victimize? No one. Whose rights did they violate? Not a single person. Where is the victim? Not one person claims to have been victimized. Where is the accuser? Not one person ever stood up in court and accused anyone of criminally violating their human rights. This fundamentally goes against the most basic element needed to fulfill the act of committing a crime…there is no victim!

Naturally, whenever an innocent person has been victimized and their human rights have been violated then citizens serving on a jury have a responsibility to enforce the common law, hold people accountable for crimes, and restore justice for the victim. But if there is NO VICTIM there is NO CRIME!

The purpose of law is to protect human rights, liberties, and freedoms, prevent people from being victimized, and to restore justice when crimes are committed in a civilized manner according to the common law that is enforced exclusively by a unanimous consensus of citizens serving on a jury!

It is critically important to understand the supreme power of the jury and how it must be applied today in our court system to immediately reassert citizen control of government and enforce the law of the land according to the constitution.

When the government is out of control and relentlessly prosecuting innocent people for victimless crimes it takes just one courageous juror to stand up for justice and deliver a verdict of “NOT GUILTY”. It is imperative to learn the law and know your rights. Become a card carrying member of the Fully Informed Jury Association and honorably fulfill your civic duty by serving on a jury. Educate yourself and others about juror rights to deliver a verdict according to conscience.

Asserting our power on the jury is the first step to regaining citizen control over government through the courts. By defending innocent people, who have committed no crime, and who thus pose no threat to society, we can free up our justice system to PROSECUTE THE REAL CRIMINALS who are causing the greatest harm and actually victimizing millions of real human beings.