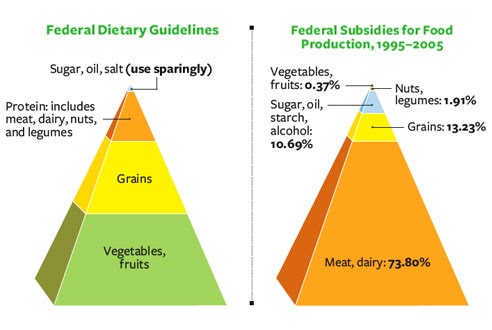 The U.S. government provides subsidies for commodity crops such as corn, soy, and wheat, which are often used as ingredients in processed and junk foods. These subsidies contribute to the high rates of obesity and related health problems in the U.S..

A 2016 study by the Union of Concerned Scientists found that the U.S. government spent $18 billion on subsidies for commodity crops in 2015, and that a significant portion of these subsidies went towards the production of unhealthy foods. The study also found that these subsidies disproportionately benefited large, industrial farms and contributed to the consolidation of the agriculture industry.

These subsidies have negative impacts on small farmers and the local food system by creating an uneven playing field for small farmers, who often struggle to compete with the large, subsidized farms that dominate the market.

Addressing the issues of our food system will require a multifaceted approach that involves eliminating government subsidies for junk food that incentivizes unhealthy eating habits and increasing community efforts to improve access to healthy food.