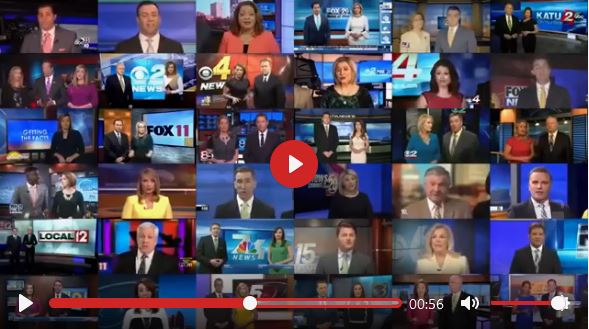 The mainstream news is entirely fake. To prove this, you can simply see that every major network reads the exact same script on every local channel. Take a look at a few examples:

The absolute nonsense being shamefully peddled as news is embarrassing to watch.

“Frank Ocean tells a major fast food chain to buzz off, and which celeb peed in a glass jar” “Is it time for dogs to have a social network of their own?”

As you will see, it doesn’t matter if you are watching ABC, CBS, FOX, NBC, or WGN, they are all reporting the same story, presenting the same narrative, using the same talking points, and even mindlessly repeating the exact same script.

“Economic factors may take some spring out of the Easter Bunny’s step this year” “I scream you scream…well, you know the rest”

We are supposed to think that FOX News is “right wing” and ABC is “left wing”, but the evidence is clear that all of these networks read the same script, promote the same stories, and pursue a common agenda.

“A Christmas present or two or ten” “Its cyber Monday, a day on the retail calendar that can be enjoyed from a desk or the couch”

This isn’t news reporting, this is brainwashing and neuro linguistic programming. Repeating the same messages over and over is a method of mind control and it is used to input thoughts into people’s heads that otherwise wouldn’t normally exist.

As you can see, this phenomenon is happening every single day, on every channel, of every major media network; it is a non-stop marathon of fake stories, running around the clock, 24 hours a day. This doesn’t happen by coincidence, it is clear that there exists an omnipotent control of the media that is capable of placing identically scripted messages in live news broadcasts of every local station across the entire country.

Perhaps the best example which exposes the totally fraudulent and disingenuous reporting of the mainstream media, is a scripted message that was released by the Sinclair Broadcast Group to let the public know that “Fake news is dangerous for our democracy”. In a desperate attempt to cover up their own shamefully biased and unbalanced journalism, these mainstream networks unwittingly exposed exactly how they are the most fake and dangerous news organizations of them all.

“The sharing of biased and false news has become all too common on social media. Some members of the media use their platforms to push their own personal bias! This is extremely dangerous to our democracy!”